Last week pakana woman, Ruby Hall (Year 9) was selected as a member of the National AFLW woomera’s team. In addition to representing the College in the Senior Firsts XVIII, she also represents Tasmania in the Devils U18 squad and plays for Scottsdale FC. We celebrate with her as she enjoys her football and keeps developing from strength to strength. 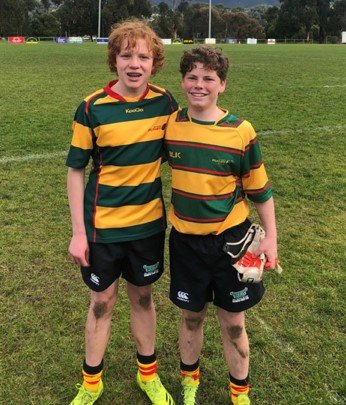 Congratulations to Year 8 students Nate Henrys and Eddie Toohey on their selection to play in the Under 15 Northern Tasmania Rugby Union team, winning against the southern team 30-27.

It was great to see our Boys and Girls Firsts football teams compete for their SATIS final spots. If either team wins this week they will progress to the state final on Saturday 2 July. Our volleyball program has started this year under Ms Michelle Rybka and has seen a huge number of students involved; offering a wonderful opportunity for our senior students to assist in coaching and preparing all students for their rosters in Term 3.

Congratulations to our netball teams that have been hard at training and playing Saturday morning matches at Hobblers Bridge. There was a lot of puddle dodging there last Saturday and our girls were all up for the challenge playing very well in the conditions; well done.

Good luck to our runners in Scotch Oakburn College team on Sunday morning in the Launceston Running Festival. At last count, we had the third largest team and the largest school team!

Congratulations to everyone for their sports achievements this week, especially the Boys Senior Firsts Team who won against Launceston Grammar to take us into the heart of the finals next Wednesday when they’ll travel to Claremont to play against Guildford Young College.

We also congratulate the Girls AFL Senior Firsts Team who finished their rounds on top of the ladder and enter their finals as well next week.

There is a story in this week’s chapter of Legacy about responsibility, that I think is very important for us to remember for what we do on the field and the attitude we do it with.  “Remember, trusting each other is a responsibility for all team players.   And right now, when we might think all is against us, it’s an uphill battle, that we really can’t achieve our dream of winning the flag, I give you this story for incentive that yes – we CAN do it!”

I quote our story this week word for word so that I don’t misinterpret the significance of its story for where we are in our sporting calendar:

“In the book All In: The Education of General David Petraeus, the former commander of US forces in Afghanistan, says, ‘Instill in your team members a sense of great self-worth – that each, at any given time, can be the most important on the battlefield.’

In 2011, Stephen Donald became an unlikely hero.  A year before, Donald had played what many thought would be his last game as an All Black, after an unfortunate performance against Australia. As the Rugby World Cup unfolded on the world stage, he was fishing up the Waikato River.  But then a series of disasters hit the All Blacks.

Dan Carter, the fly-half – arguably the most talented player in the world; unarguably the highest point scorer in history – was considered essential for an All Blacks victory. During a final kicking practice, he felt a pop and then the pain. Carter had torn a tendon and his Rugby World Cup was over. A nation wept.

Second to go was his understudy, Colin Slade. In the quarter final against Argentina, he aggravated a groin injury and was out. A nation mourned.

Meanwhile, with only one specialist fly-half left in the squad, Graham Henry tracked down Donald’s mobile phone number and, when Donald eventually called him back, the coach asked what he was doing – whitebaiting. ‘We’d had a good day, hauling in around 11 kilos, but it got a lot better,’ Donald later told a crowded RWC press conference. Henry told him that if he brought his haul to the Heritage Hotel in Auckland, he’d be in the All Blacks squad.

In the forty-third minute of the final against France, the third-choice playmaker, Aaron Cruden, fell to the ground, his knee hyper-extended. Yesterday’s man, Stephen Donald, ran on to the pitch, his borrowed black jersey a size or two small. A nation stopped breathing.

In the tightest and most gruelling of finals, the French gave away a penalty. Without needing to be being asked, and with destiny hanging on the moment, Donald stepped up, nodded at the goalposts, and landed the kick.  They proved to be the winning points.

New Zealand’s fourth choice fly-half, having not played a game of rugby for six weeks, stood up when it counted and became a leader on the day.”

Be a leader in your sport, be a leader in your team, be a leader of yourself and take responsibility for all your actions in your games, and you will go well, I know you will.  I see the strength of our sporting competitions grow as I travel around all the different sports we play at Scotch Oakburn.

Have a great week everyone, and we wish our AFL teams luck as they both enter the finals.  When you see them around our campuses, say hi and congratulate them for all the success they have had so far, and wish them success for their finals.